She knows drama but prefers comedy 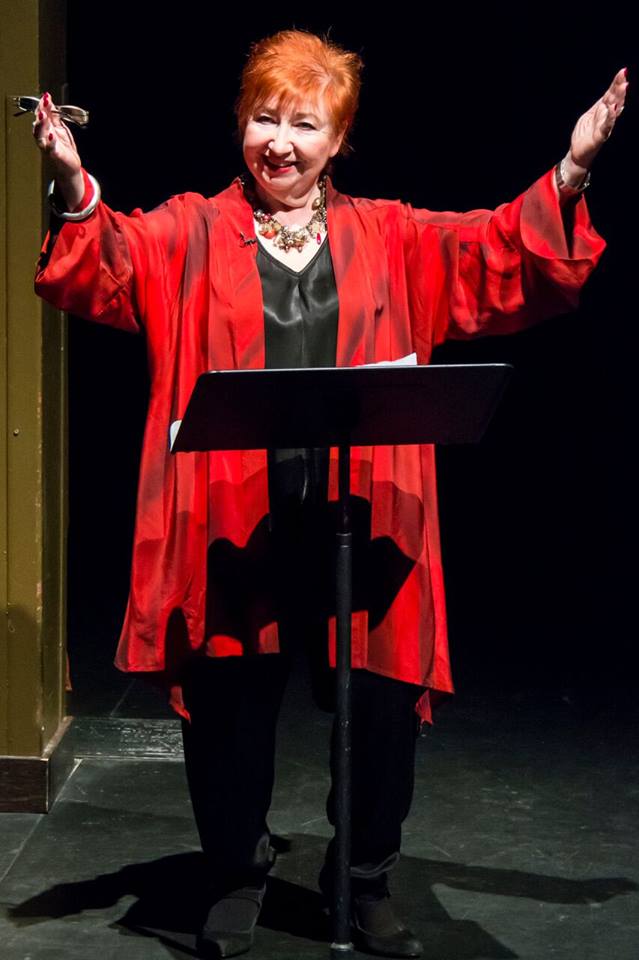 SHE KNOWS DRAMA BUT PREFERS COMEDY

AirFarce veteran and beloved comedian, Luba Goy, will host These Are Their Stories on April 4th at the Richmond Hill Centre for Performing Arts’ Plaza Suite at 7:30 pm.

“I have never experienced anything else like them,” she says about High Notes Avante’s events. “They bring the community—not only in Richmond Hill, but everyone whose lives have been affected by mental illness—together. The performances give the bravest of brave creative people an opportunity to share their stories. They just open up my heart.”

Luba has witnessed a tremendous shift in the public’s ability to understand mental illness. “I know many people with mental health issues but I do not divulge their stories because it is not anyone else’s business to share than their own.”

Luba will however share about her father, Stepan Goy, at this event. In 1951, Stepan began suffering from epilepsy as a result of an accident fracturing his skull in Belgium, shortly before immigrating to Canada, by ship. Stepan, Luba and her mother Olya, settled in Ottawa, in a vibrant Ukrainian community which included church and traditional culture. They didn’t speak English. Luba, who was starting kindergarten, quickly absorbed the language. By age ten she became translator, for her father’s appointments at the Ottawa General Hospital.

Unfortunately, his epilepsy treatment included becoming an Outpatient at the Brockville Mental Institution (opened in 1894). For eight years, Stepan unhappily travelled back and forth, by train between the cities. Being a child, Luba found the occasional visits to the Brockville Hospital terrifying. “My father didn’t belong in a scary old place with all those people suffering with mental illness,” she says. “Some of the treatments were experimental, which caused hallucinations, he got electroshock treatment, and later fell into a dark depression.”

Olya was the primary breadwinner and worked in the bakery at the Lord Elgin Hotel. She was educated and taught Ukrainian School at the parish hall. Stepan, a talented actor, comedian, singer, mandolin player, director and writer participated actively in the community. He did stand-up and was called the Ukrainian Charlie Chaplin!

“My father and I sang and performed on stage together at every Christmas pageant,” says Luba who played the accordion.  “It was the happiest times of our lives. All my friends adored my father, who made up songs about them on his mandolin. ‘Your father is sooo funny!’ they’d laugh. ‘Ya, I just wish he was normal, like everyone else.’ ”

Luba’s father was a secret from her English school friends. “I never told them he spent time in a mental hospital, and that I wrote him letters because we didn’t have a phone. I just wanted everyone to think I was a normal 12-year-old, even though I worried about him.”

When his seizures got worse, Stepan was told he had to undergo a lobotomy. The people at Brockville wouldn’t let him go home to celebrate Ukrainian Christmas like he always did. “His tenor voice was the backbone of the Christmas Eve mass.” says Luba with pride.

He was to be kept under ‘observation’. “He must have felt very alone and scared, being apart from everyone he loved.” That Christmas Eve, January 6th, Luba and her mother did not decorate a tree. Stepan had never missed a Christmas celebration. “He was a devout Catholic.”

A month before he was to have the brutal procedure that could have left him in a vegetative state, or killed him—Stepan died instead by suicide. It was Ukrainian Christmas Eve. He was 34 years old. The news was delivered by telegram on Christmas Day. Luba read the dreadful message to her mother. “You can only imagine how devastated we were”.

“Our heartbroken community rallied and collected money for the funeral and also sent me to summer camp,” says Luba. “However, there was no counselling and I didn’t talk about it with my English friends. Nowadays doctors would have told me that it wasn’t my fault and to talk. Back then, society didn’t know how to handle the ripple effect on families. Thankfully we have come far since then.”

Luba always adored her father and credits him with her own talent. “Although I only had him for 12 years, my father gave me everything I needed in life,” she says.

“I’ve had such a rich life, and have so many stories to tell.” Stepan was also a Freedom Fighter and wanted to liberate Ukraine. “I was afraid he would choose Ukraine over Mama and me. I hated politics and swore I would never have anything to do with it!” she says. ”Ironic, when you think about the career I’ve had, making fun of politicians.”

“Why make people cry when you can make them laugh? Laughter makes you feel better about everything. It’s like music to your soul.”

The queen of comedy will have you roaring with laughter in between the wonderful music and storytelling that cellist Erika Nielsen and singer/songwriter Dan Hill will provide. April 4th, 7:30 pm at Richmond Hill Centre for Performing Arts. For tickets call 905.787.8811 or visit rhcpa.ca. Regular tickets are $35 while $60 tickets include a complementary beverage and a $25 tax receipt. There are less than 150 tickets so better get yours today!

HIGH NOTES AVANTE is a registered charity (827049388rr0001) using artistic expression to inspire, give hope and connect those touched by mental illness.

Our objectives include offering art productions directed towards the alleviation of loneliness and isolation as well as reducing any associated stigma.

Our dream is to one day produce “THE” mental health concert that will be accessible from coast to coast in Canada and give hope to everyone touched by mental illness, no matter where they live. Read more at   www.highnotesavante.ca

Share on FacebookShare on TwitterShare on Linkedin
Categorized: Uncategorized